My Being Fired/Laid Off Horror Stories 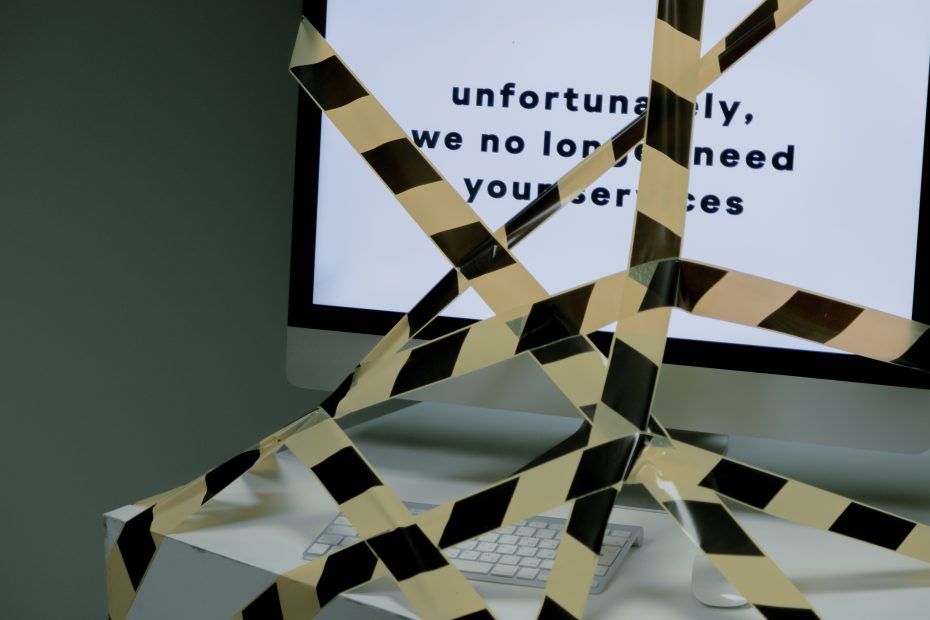 So I saw a tweet in my stream a couple of days ago that got me thinking a bit about my own job history, especially in tech.

I was replaced by a bell.

I made the bell business cards on my last day. https://t.co/Jztrw4kEFG

For the most part, every job I’ve ever left has been on my own terms. It might be for a better opportunity. It might be because I was fed up with the state of the company I was working at. But almost always I left when I decided it was time to go…. with 4 exceptions.

Two of the events happened in my pre-tech career and I’ll only touch on those lightly. In the first one, I was accused by a customer of doing something that I did not do: namely stealing from them. There was no evidence to support either side and in a customer who brings business lots of money vs a low-paid menial hourly worker, the worker loses every time.

In the second instance, I got sick (mononucleosis) and was unable to work my factory job for nearly 2 months. Somewhere along the way, my boss decided he didn’t want to wait for me and fired me. I was living in a so-called “right to work” state at the time. In such places, you have no recourse at all. An employer can fire you for whatever damn reason they feel like so long as it isn’t for a legally protected reason like age, gender, or religion.

That’s more than enough said about those two. On to my tech career.

I have two examples from my tech career. One of them is so pathetic it’s almost hilarious. The other example still makes me sad to this day. I’ll delve a bit into each in more detail.

In the first example, I was working for a rather large company as a contractor. It was my hope to be converted to a full-time position at some point. I was younger and it was fairly early in my career and I still had the naive belief that “contract to hire” was worth the effort. It isn’t. While some people succeed, it’s a mess and you’ll get burned more often than not. But that’s just my opinion. And despite the fact that with the job I got right after this I actually succeeded in going contract to hire, I will hold that opinion until my dying day.

As we reached the end of my first contract, there were no full-time positions open so I was extended. The second time around, the same thing happened and I was extended again. Then our manager went on leave (and was later dismissed by the company before the leave was over, but that’s a whole other story I won’t go into), and we started reporting to their boss.

And let me tell you, our new boss was a truly delightful human being (please note the heavy use of sarcasm whenever I make that statement). She hated our team. She hated dealing with us. I really think that she hated all of us individually, not just as a team. It didn’t help that we were located in an office in Columbus and she was based out of a great, cold state to the north. No, not that one. Even further north. Beyond the Great Lakes and just shy of the Canada border north.

But more than her hatred of us as a team, she absolutely despised all the contractors. I don’t recall how many of us were contractors exactly. I think there were 2 or 3 others on my team.

Unsurprisingly, the announcement came a couple of months later that all the contractors were out the door at the end of the week. And this was like on a Wednesday or something like that.

At the time, I was in the middle of a work project that would take at least 3 more weeks to complete. So, being a conscientious developer, I sent an email to the business owner for the project letting them know my contract had been terminated and that I would have to stop my work in order to transfer the knowledge on the project to one of the team’s full-time developers, who would then have to complete the current tasks. Having provided a professional update, I thought nothing of it and started writing up docs for the KT.

The next day I was informed that my termination had been delayed by 30 days so that I could complete the work. The “update” came via my team lead as my “boss” refused to speak with me, even by email.

Apparently, the business owner had decided it was too important to delay the project and had gone over my boss’ head and demanded I be kept to finish the current work tasks. As if her hatred of contractors wasn’t strong enough as it was.

Moral of the story: By demonstrating my worth to the business owner, I was able to delay my near-immediate termination, gain several weeks to find a new position, and piss off a nut-job boss all in one fell swoop.

The last example comes from the job I had before my current one. I joined a “startup” as their new tech person. I say startup because they were still small and the app wasn’t well developed, even though they’d been in business something like 6 or 7 years already.

They’d reached a point of maturation and were ready for the next phase. I was brought in to re-architect the application, move it to the cloud, make it scalable, and prepare it to move into the next phase.

Long story short, I spent a bit over two years doing just that, taking the app to the next generation and building up a team of people reporting to me to develop and support it. We even moved into a nice, shiny new office.

Less than a month later, the sky fell in. It was discovered that there were alleged financial improprieties by someone who shall rename nameless (but their position rhymed with Me-E-Oh) and instead of being a profitable company on the verge of being bought out by a major industry player, we were suddenly multiple millions in debt and unable to pay the bills, most likely including the next payday of salaries.

There was a general staff meeting run by a couple of the board members where all this was laid out to us. I met with my team a short time later and basically told them to go home and work on their resumes as most likely the company wasn’t going to exist for long. After I sent my team home, the senior leadership (including myself) gathered to discuss our options.

During the two years I worked there, we had grown from a team of 8 to more than 30 people. The day after the news, we went from a team of 30+ to 11. A day or two after that, we gathered a few vans and trailers and salvaged everything we could from our nice shiny new office. A lot of things had to be abandoned. Only the essentials went with us.

Those of us who remained worked the next few weeks without any expectation of getting paid. We believed in the company and its mission. We were determined to try and keep it alive if we could, knowing that if we couldn’t obtain some funding soon, we would have worked that time for nothing.

We found a temporary home in one big room at a tech reactor space near Ohio State University. The group that ran the space was one of our original investors, but giving us space for a few weeks was as far as they were willing to go further with us. Several of the other investors, now fully informed of the situation, came in over those weeks and performed a full review of the state of things: The product, the client base, the pipeline for new and potential clients, and the roadmap I had helped to lay out.

Thankfully for us, at the end of it, a couple of our investors–and one new one–decided to continue to support us, but at a much-reduced level. Shortly thereafter we moved once more to a tiny two-room office way north of Columbus. And we made a go of it.

For nearly two more years we toiled to try and build the company back up. But too much debt had been left on us and too much reputation damage had been done. For those unfamiliar with the education space, getting schools to change how they currently do things is a nightmarish process. You have maybe 3 months each year as a “selling season” to try and convince them to give you a shot. And many, many schools are too afraid to be first. If you can prove yourself with a few, then your odds go way, way up. It’s convincing those few that is the hardest.

We gained a few clients, but it wasn’t enough, quickly enough, to gain critical mass. We slowly dwindled from 11 down to 5 before the last investor threw in the towel. I never even got paid for my last month of work. Others sacrificed far more.

If it weren’t for the huge pile of debt and the destroyed reputation left by one asshole, we probably could have sold the product and company for quite a bit. But no one wanted the baggage. And believe me, we tried.

I loved that company. I loved the product I was creating. It was a potential game changer, and we had a long list of improvements and new features we were working on adding. I would still be working there now if it hadn’t gone under. That’s how much I believed in what we were doing. And if someone in the EdTech space wanted to bring me on to recreate that dream, I will join you in a heartbeat for that journey.

Moral of the story: Even a dream situation can go horribly bad due to the poor decisions made by just one person.

So what is the conclusion here? Why did I bother to share these tidbits of so-called wisdom from the realm of my experience? Well, it’s partially by way of warning. Remember, even the best of situations can go very bad, very quickly. So make preparations. Don’t live paycheck to paycheck. The tech industry is a finicky one. Build up a safety net for yourself.

And the other reason, believe it or not, is to give you some hope. I’ve had bad situations, and I’ve survived. You can too. When those bad times hit–and believe me they will hit you at some point or another, probably multiple times in your life–just keep pushing through. It will get better. You can survive it. You are good enough, and you are strong enough. I believe in you.